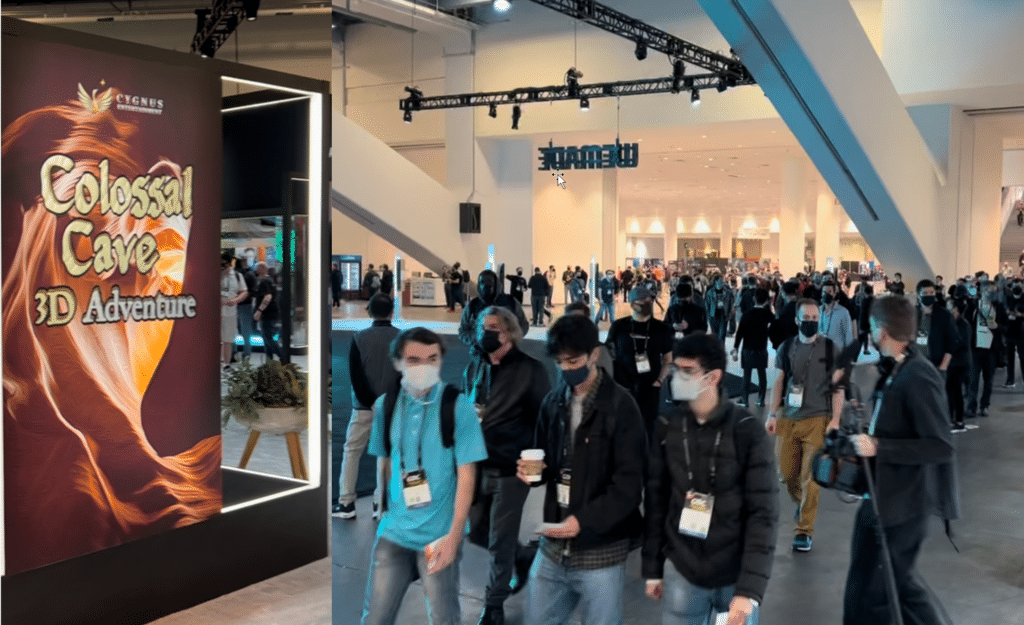 Last month we did our big announcement of the game at the Game Developers Conference (GDC) in San Francisco. In the months prior to the announcement Roberta, I, and the whole team, were working long hours and weekends trying to get ready for the show. As in most things, first impressions are critical. This would be the first time anyone outside our team would learn what we are up to and be given a chance to play the game.

We were extremely nervous about showing the game publicly. Would people like it? Would we get the bugs out in time to take the game to the show? Would the press trash us?

I shouldn’t admit this, although by now most of you have figured it out, but Roberta and I have been away from the industry for a very long time, and we aren’t that up to date on the state of the industry. Until just before the show I still assumed it was a consumer show. I had prepared for long lines of gamers who would stand in line waiting for their chance at the headset. In the days before showtime the team at Unity educated me. The GDC is a show primarily focused on Game Developers (One would think that the name might have tipped me off). Attendees are there to promote their own game, learn about game development or seek distribution for their game. The vast number of people who would attend the show weren’t really there to see our game. They had their own reasons which had nothing to do with us.

That said, we were there for the first of those reasons: to promote our game! And, the show worked perfectly for that. Before the show, no one knew what we were doing, and within hours of the show’s opening the word spread around the world. We were able to meet with a lot of press who wrote some very flattering articles (about Roberta and I personally, and about the game). We had fun doing a live streamed interview on Twitch. We were also able to meet with some important players who are helping us bring the game to new platforms.

And, even though most people weren’t there just to see the games, we did have a steady flow of both press and gamers into the booth. We wanted feedback on what people thought about the game, and that did happen. The positive reviews and comments tell the story, so I won’t bore you with how happy we are. But, we are!

There were some problems that were our own fault. We have a computer version, but I really wanted to showcase the VR version of the game, so we took Quest 2 headsets to the show. Our plan was to stream video from people playing the game to a large screen monitor in our booth. It was a great plan, and worked well when it worked. Every time we would put the headset on someone and they would start playing, we’d collect a crowd that would get deeper and deeper as they would play the game. However inevitably,  the person wearing the headset would be 10 minutes into play, and the large screen tv in the booth would go black. This caused two problems: Our ability to guide the person in the headset, when they’d get stuck, ended, and the crowd would look at me like my code was buggy. In reality, the problem was being caused by radio interference. When you fill a giant auditorium with about a million pieces of wireless gear, there is so much radio interference that streaming video wirelessly becomes unreliable. We tried connecting the headset via a wire, but then we had both marketing and technical issues. We worried that if we attached a wire to the headset suddenly people would decide the game required tethering and that the great framerate was being delivered by a PC, not by the Quest 2. We convinced ourselves that we could explain this issue to the press, but then couldn’t get the Quest 2 talking to the Mac Mini that Unity supplied for our booth. We had problems with finding the right cable, etc. We probably could have solved all of this, but we were also short-staffed. We had a busy booth!

We were not without software issues. We’ve been refining the user interface from the beginning. No matter what anyone tells you, you cannot really know if a user interface feels good without implementing it. We have changed our mind about how the interface should feel in VR many times. Roberta agonized over how to give a motion system (locomotion) to the game that would minimize or eliminate nausea. For those of you who are new to VR: Full immersion in VR can cause seasickness, particularly when moving through a 3d world. Your brain reacts to what your eyes are seeing and is constantly adjusting your sense of balance. If what your eyes see is different than what your body thinks is happening, sickness can occur. Some people have no problem at all, and some have a huge problem. Roberta and I have spent years of our lives exploring the world on a small boat, and are no stranger to seasickness. Roberta spent a month focused on this issue. And, we have spent many more months refining how the player interacts with objects in the world, and how they grab items from inventory. Originally, we wanted to use the same interface on PCs and VR. We discovered that these are very different universes and you need to do things differently. The bottom line was that a couple months prior to the show we decided we were on the wrong path and needed a new direction. However, we knew it would take a lot of code. I was faced with the decision of pushing hard to “do it right” or “perfect the system we had that we already knew we didn’t like, and take it to the show.” I chose the latter option. The idea of having to show up on show-day and saying, “Oops we almost got done, but didn’t” was not an option. So, we went with what we could make stable, knowing we would toss it out the day after the show.

And, all of that said, none of it was visible to the show attendees. Our booth was busy nonstop. People liked what they saw. They “got it” for what we were trying to accomplish. They went home happy, and we went home happy. It was a roller-coaster ride that we were able to complete safely. Now for the next battle: Finishing the game! Onward we go…